So I finally wrote down our story...
I've been meaning to do this for a while, because as time goes on the memory gets a little softer around the edges. I want to try to capture the early "story of us" as much as possible before it's just a distant wisp of feeling that is swept away by the broad stroke of time.

Our first year of knowing/dating each other was unexpected, fun, exciting, overwhelming...and hard hard hard. I honestly don't know what I would have done without the support of my dear friends and the wise words and unconditional love of my family. It's been such a good exercise for me to look back and pull out all of those feelings and memories because it's a huge blessing to see what we went through and where we are now. I don't want to forget our journey, because it's a very clear picture of redemption and grace. I learned a lot about prayer and forgiveness and myself and relationships. Maybe what we went through wasn't necessary, maybe we took the harder road, I don't know...but honestly, I wouldn't choose anything different if we had a chance to re-do it because out of the pain and struggle came something SO beautiful and I'm not sure we would be where we are today if we hadn't gone through that fire. The beauty of it is twofold: 1) it is in our rear-view mirror and we are stronger because of it; and 2) it has prepared us for when we will undoubtedly go through more difficult times together because it gives us a reference to look back on and remember "we made it through that, we can do this too".

When I look at where we are today, it's hard to believe what we went through to finally get to the point where we knew we wanted to be together and move towards marriage. It's difficult to remember that it was once so hard and so painful, because where we are today is so far from that. And we are thankful. SO thankful.

So here we go...Our Story. I've divided it up into 3 parts that I'll be posting over the next few days, because, well, it's just long. Here we go!

The background, the “before-we-met” story, is really the best part. God truly does go before us.

It all started with one of my best friends in college (and still to this day), Cameron. She went to high school with Z and was very close with him and his family. Cam remained close with Z through college, visiting him at West Point and staying in touch over the miles. Z didn’t date very much in college (understandably; WP keeps you busy) and after graduation he started desiring a relationship and thinking/praying about what that might look like. Because he’s a very wise man, he reached out to a few women in his life that he trusted and whose opinion he valued (his mom, Cameron, etc.) and asked them what kind of girl they thought might be a good fit for him.

Cameron responded via email and recalls that as she was thinking and typing about this girl she pictured Z with, she had an epiphany: “I KNOW this girl!” and so began the plan to introduce us. This was the summer of 2008, and while I remember Cameron mentioning that she wanted us to meet and thought we’d really hit it off, I didn’t think much about it. Our paths wouldn’t cross until almost 6 months later.

We officially met at Uncle Julio’s Mexican Restaurant in Atlanta sometime in late December of 2008. Cameron had tried to get us together a few times in the previous months, but it never worked out, and honestly I was enjoying dating around and wasn’t particularly motivated to meet another guy.

When I tell the story, I never count that first meeting. I say we met on New Year’s Eve. Its way better that way. Really though, we met a few days before NYE. A group of my college friends were together celebrating a birthday. Z wasn’t actually invited and just “stopped by” as we were finishing up at Uncle Julio's. Later I learned that he came because he was told I was there and it was an opportunity for us to finally meet. He was in town for the holidays and days away from heading across the country back to Seattle.

I don’t count the first meeting because, well, it just didn’t go that well. I remember seeing him for the first time and thinking that he was a good looking guy, but it was a weeknight, I had work the next morning, it was late and I had a 45 minute drive standing between me and my bed. I just wanted to get out of there yet he sits down and starts telling some story that just went ON and ON...ugh. I didn't want to be rude, but seriously. Wrap it up. I've got a bedtime to make.

When Zach recalls this first meeting, he will say that I was completely unimpressed and couldn’t wait to get out of there. And I thought I was so subtle. Woops.

It’s funny to look back now, because I remember almost every detail of that night…what I was wearing, what Z looked like…but at the time, it was just another evening out with friends. I had no idea how much that night would change my life and now I smile every time I see pictures from that night. I also smile because these girls are some of my favorite people in the world and I hope we will always be a part of each other’s life, even though distance has separated many of us. I tear up just thinking about it. 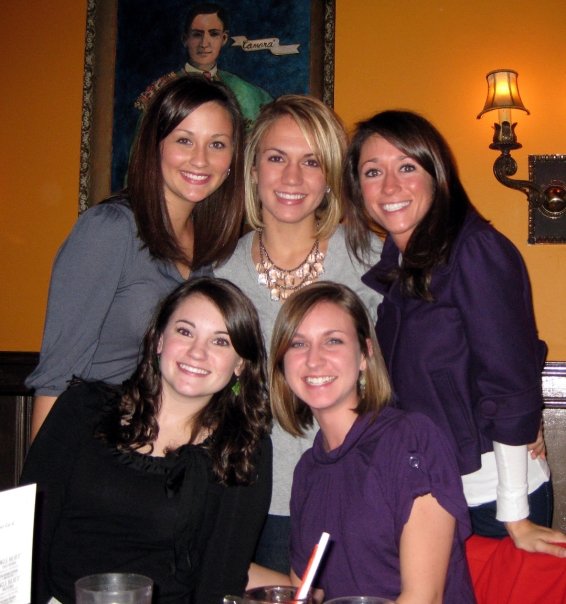 Whew…ok back to our story.  At the time, I didn’t think twice about the night or about meeting Cameron’s friend Zach. I was too busy working and getting excited about spending New Year’s Eve with my favorite people at a friend’s lake house. Cameron is a sneaky one, so when she talked to Zach about his plans for the night, she invited him to join us at the lake house and gave him MY number to call for directions/details/etc.

He called as my friend Stephanie and I were driving up to the lake. I flirted shamelessly but harmlessly as he hemmed and hawed over whether he would make the drive from Atlanta to Hartwell for a few hours before he had to turn right around and make his EARLY morning flight back out to Seattle. “Oh just come, it will be fun!” and finally he was convinced.

He didn’t show up until much later that evening as the party was well underway, but once he was there, we stuck pretty close. It’s a little fuzzy now so I don’t know if HE stuck close to me or I stuck close to him, but I do remember really enjoying him and our conversations. Mostly though, I was just enjoying the night with my friends and this fun, interesting guy that I thought I’d never see again.

Here's one of the only pictures of us that night. I love it for a few reasons: 1) I have a chip in my hand while I'm saying something that had to be important, otherwise the chip would have been in my mouth; and 2) Zach is looking really intently at me and I think that's sweet. Also, as I typed this up, I'm wearing that same tshirt I had on in the picture. We were such party animals, in our pjs probably before midnight. Not much has changed. 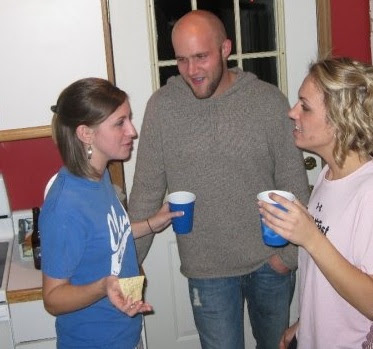 Midnight came and went and a few hours later Z had to leave. As he was saying his goodbyes, he made eye contact with me and said (smoothly) “hey, come walk me out”. Looking back now, it really defies all logic that I agreed because it was FREEZING COLD that night, I was already in my pajamas, and we all know how I feel about being cold. No sir.

But I went out with him and leaned on his car as we talked for a few more minutes. He hugged me to keep me warm and then said something totally cheesy about re-doing midnight and getting a New Year’s kiss. And then he counted down, said “Happy New Year!” and kissed me. (You can’t unread that, Mom and Dad. Sorry!)

It was totally cheesy, but I loved it and it makes me smile to this day. My favorite part about the whole thing was that all of my friends who were in the house had gathered around the windows to spy on us, even going as far as turning off the lights inside so they could see us better in the darkness on the driveway. Needless to say, I faced a lot of ribbing when I walked back into that house.

I truly thought that was the extent of my interaction with Zach. I chalked it up to a fun night and that was it.

Until that wasn’t it.

Z called me a few days later and then just kept calling. A few weeks later, he came back to Atlanta and took me out on a real date and we spent some quality time together. I later learned that the trip was planned solely to spend some time with me in order to determine if there really was SOMETHING THERE behind our phone conversations and if it was worth pursuing. At the time he told me he was coming back to see his family. I didn’t question it. We had a great time that weekend, but I had still JUST met him. I went along with things because I genuinely liked him and enjoyed our conversations and it was fun getting to know him…but in the back of my mind was always the fact that he lived in Seattle and he was in the Army. And in my opinion, those were both show-stoppers.

Email ThisBlogThis!Share to TwitterShare to FacebookShare to Pinterest
Labels: Love