Strap in you guys, this is going to be a long post. If you need to take a coffee or Cheerios break, please do. I know I did.

We just got home from Morocco and one of the first things I wanted to do was sit down to write about our experience because the need to get these thoughts “on paper” is overwhelming. Not as overwhelming as the need to start the laundry or take a shower or very carefully inspect the suspicious bites I have on the back of my right arm (do not google bedbug bites, do not google bedbug bites), but still. I spent most of our hours of travel today mentally turning over of the details of this past week and I’m just not sure how to relate them in a way that does justice to our Moroccan experience. But I’ll try. Also, the pictures I’m including are about a tenth of the pictures we actually took. Trying to decide which ones to post here was quite the endeavor. 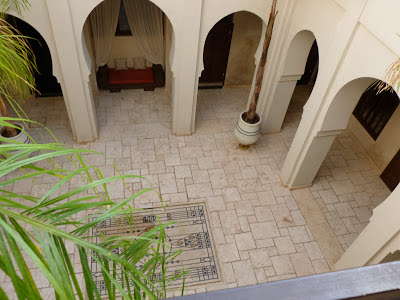 Back in June I came across a livingsocial deal to Morocco and sent it to Z to look over. We decided early on that we’d take advantage of our time in Germany by doing as much travel as possible, and this trip certainly fit the bill. We booked the trip for Thanksgiving week for a few reasons. One, we knew Z would have time off for the holiday. Two, we knew it would be freezing cold in Germany at that point and we knew Morocco would most likely be warm and sunny. Oh, how right we were. It was 70 and sunny the entire time we were there. In fact, I spent one whole day laying in the sun, soaking up
the warmth and vitamin D and reading a good book. It was perfection.  ANYWAYS, also, it was a nice way to spend our first holiday away from our families…while I still had some pangs of sadness over being so far away, I was easily distracted and  it was hard not to enjoy the day when you’re vacationing in an exotic, foreign country. 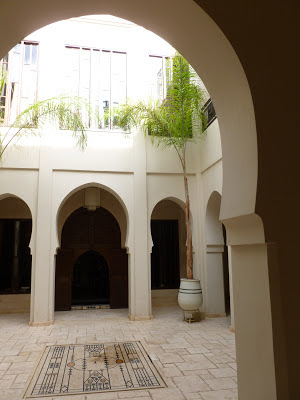 I’m not quite sure how to describe Marrakech, where we stayed, except to say that it was an assault on the senses. Our hotel (called a riad based on its size and style) was located inside the Old City wall and when we pulled up to the front door we really weren’t sure what to expect. It doesn’t look like much from the outside, that’s for sure. But the inside was truly impressive. It was so stylish and so very Moroccan. The best part was the amazing rooftop terrace where we had our breakfast every morning (and usually alone, the other guests always ate downstairs and who knows why, but that was fine by me).  On the terrace you got the best sun during the day and it was surprisingly quiet for its location, save for the the wailing call to prayer echoing over the city like a haunting siren from the mosque minarets. Everything about it was beautiful.

We set out to explore the Old City and oh my gosh, you guys…OVERWHELMING. I’ll include pictures in hopes that they will give you a better glimpse into the city than my words could. It was harmonized chaos and very stressful. There were people EVERYWHERE…walking, on bikes, on motorbikes, on donkeys, riding mule carts, in horse carriages. I am amazed that we didn’t see multiple collisions and accidents…we did, in fact, see the aftermath of one traumatic accident that left a child quite bloody…but otherwise it seemed as if everyone adjusted their courses at the exact second to avoid catastrophe. How they all managed to do this was beyond me. I was the unfortunate victim of a donkey cart collision…although my injuries are only emotional. I was so sure I was going to find a huge bruise on my hip where the cart hit me, but alas. No proof. It was actually very scary to be hit and pushed into  a wall of people, but helpful hands pulled me out of harms way and I’m no worse for the wear…although I remain very wary of all donkey carts and hugged the inside track of every street from there on out.


So we’re in this city, being pushed and pulled and prodded along and trying to take in the souks and markets and squares…there was SO much to see and so many smells and so many people yelling at you. We stood out BIG TIME as tourists (no head cover, short hair, I’m like the epitome of “not Muslim”) and the Moroccans and Berbers were SO pushy.  Everyone wants to show you where to go, everyone wants you to come follow them, everyone wants you to look at their booth or buy their goods or eat at their restaurant. And they all want money. It was nerve-wracking trying to take pictures because you never knew who would yell at you and demand money for you taking a picture of something they laid claim to. I resorted to taking stealthy pictures with my camera by my side, so some pictures didn’t quite come out. Oh well, it was easier that way. You basically had to be very rude or VERY firm. OR speak German. Most of the people spoke Arabic, French, and English, but very few spoke German. So we just threw some German sentences out and usually people would walk away after hearing that. Phew.
I resorted to simply ignoring whoever approached us, and even then, this was sometimes not effective. We were walking by a man with a monkey in the market and before we knew it, he had thrust his monkey on Zach’s shoulder and was yelling at me to take a picture. It was traumatic for both Z and the monkey I think. I mean, what do you do in that situation? You've just had a monkey thrown on you. I don’t know what the protocol is, but Z managed to remove said monkey and on we walked…a little stunned, mostly amused. 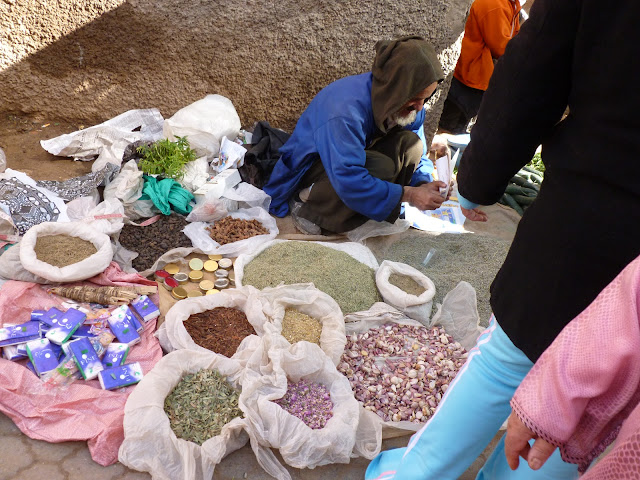 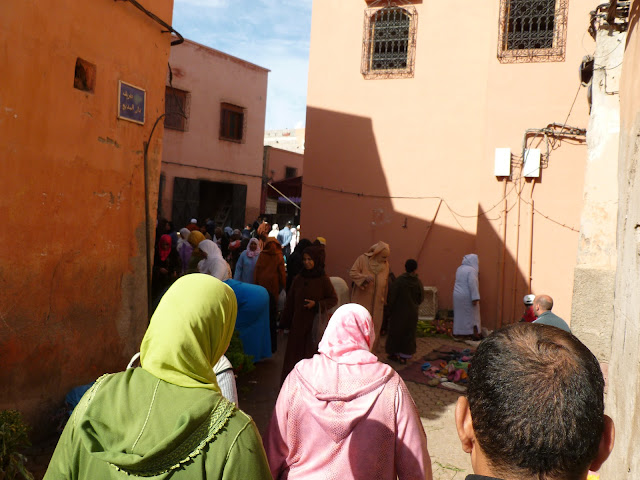 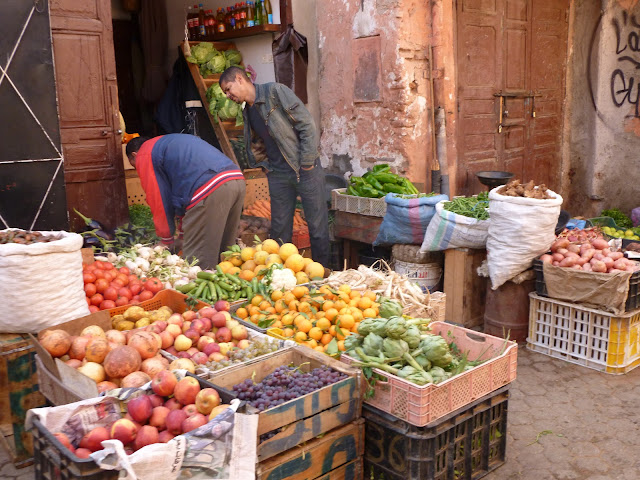 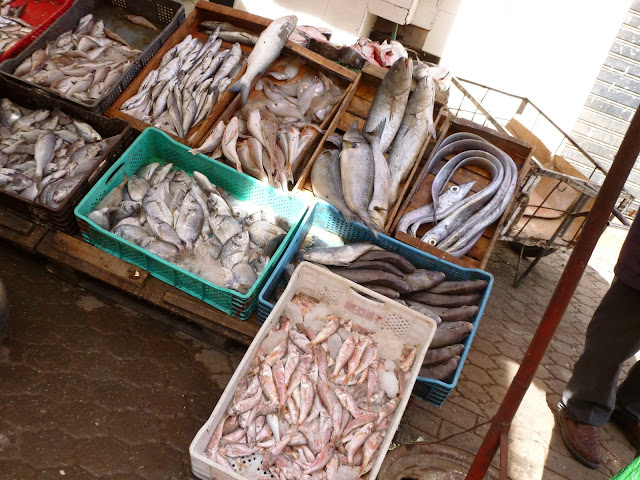 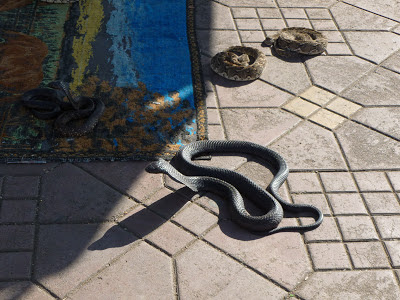 One of my favorite moments was when we decided to spend a few dirham to take pictures of the snake charmers, because really…when do you see that? So we approach these snake charmers and before we know it, they’ve draped a snake (harmless garden snake, SO THEY SAID) around Z’s neck—he was not thrilled and I don’t blame him—and they have my camera and are snapping pictures like crazy. I really just wanted one, maybe two, pictures of a cobra but we got way more than that. After all of this, the man demands 300 dirham…which is like 27 euro…or about $35. Z is the best and firmly tells them they can have 40 dirham. The snake charmer is NOT happy and demands another gift then. Um, what kind of gift? 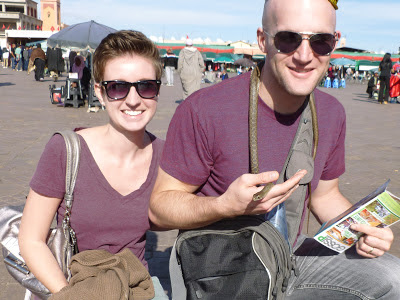 We walked away 40 dirham less and minus one ballpoint pen. I think we got the better end of that deal. 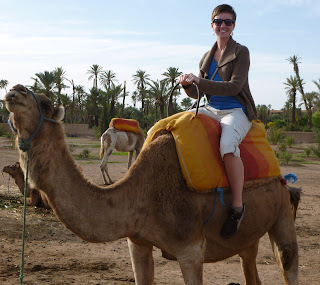 Ok, so we explored the city, we spent a day soaking up the sun (mmmm), rode camels, had massages and a cooking lesson at our hotel (Moroccans do not shy away from flavor! It was a good meal and we came away with a killer eggplant recipe), and then…our favorite day. We had a private excursion to the Atlas Mountains, a few hours outside the city. This day was amazing. The weather was beautiful and the scenery was so dramatic and so breathtaking…the pictures do NOT do it any justice, I’m sorry to say. 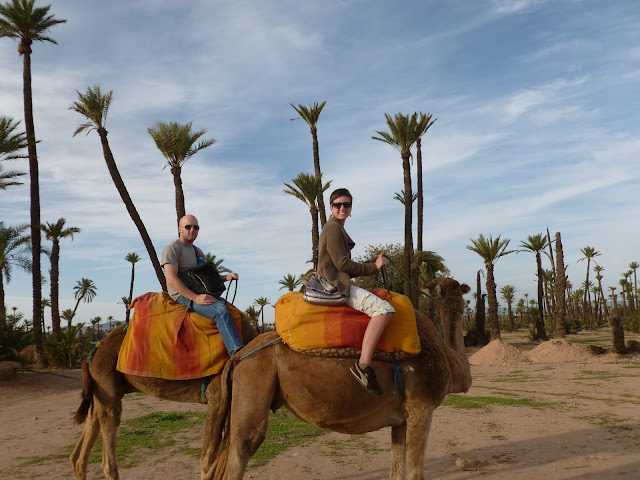 We visited a Berber household (the cow lives in the house…), we went to a herb garden, we went through a Berber market, and we trekked through the mountains to an amazing waterfall, took in incredible panoramic views of the mountains, drove through almond and olive tree orchards, had lunch IN the riverbed…it was incredible. Definitely a welcome respite from the hustle of the city…I filled up an entire memory card with pictures of the views we had that day. Unreal. I spent most of the day thinking “oh my gosh, are we really here? Are we really seeing this?” As I said, it was truly an assault on the senses, overwhelming in every way. Take a look... 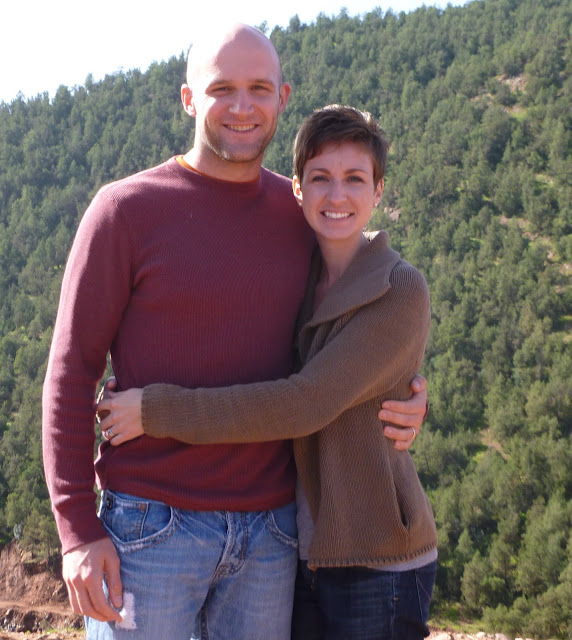 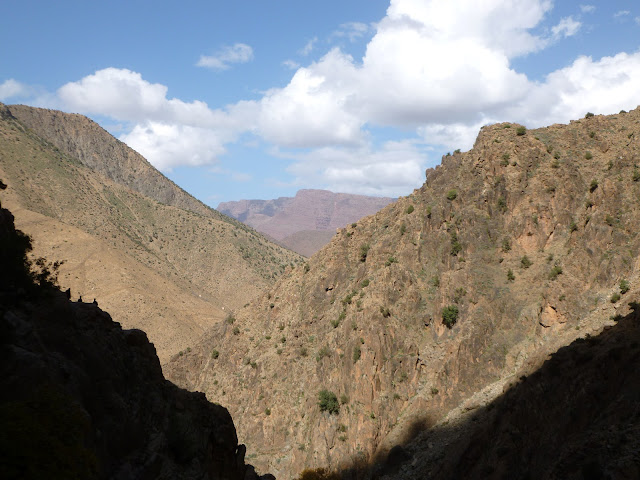 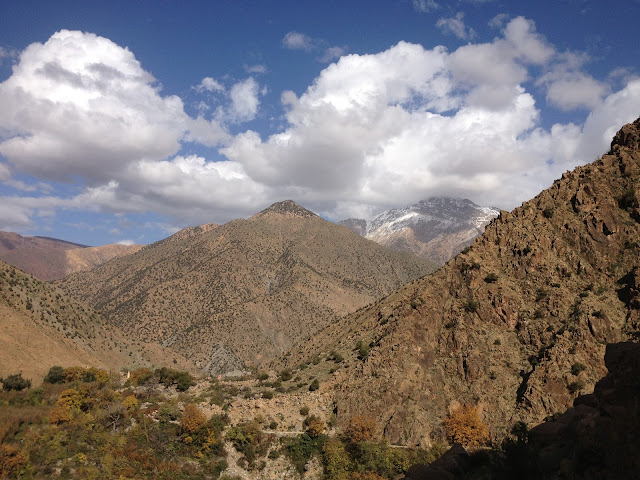 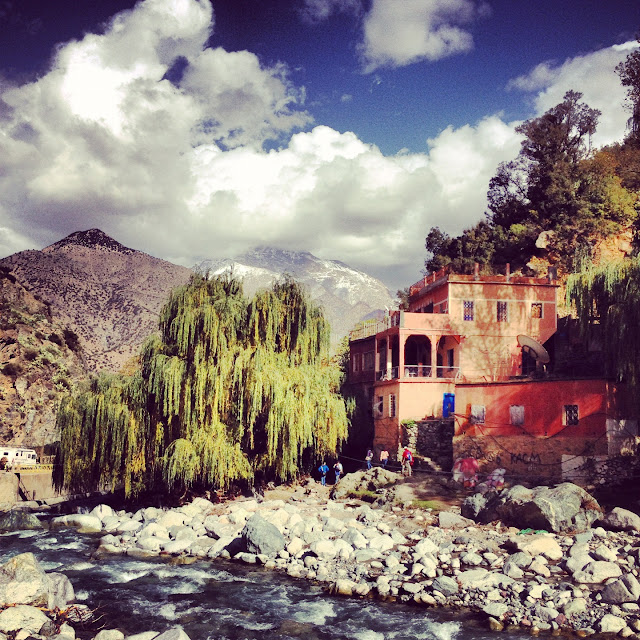 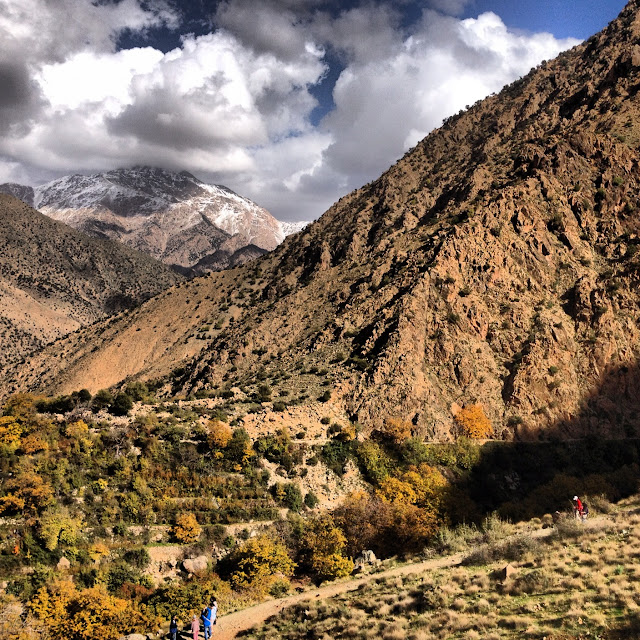 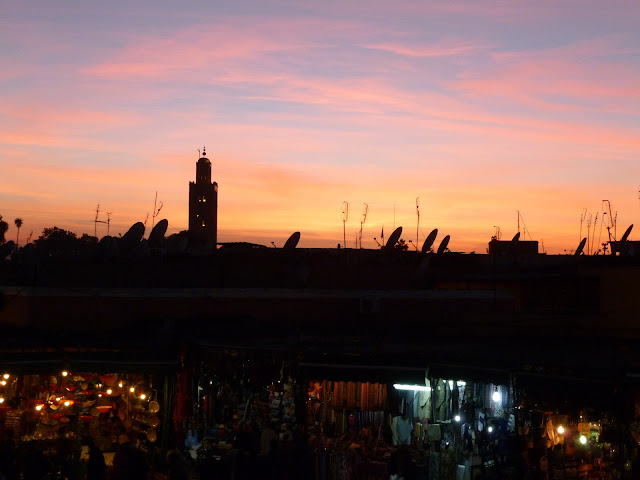 Whew. This is entirely too long and I feel like it doesn’t even begin to scratch the surface of what we experienced those five days, but that’s the big picture. A one-in-a-lifetime experience and we’re SO glad we took the opportunity. We’re also glad we went in the “winter” because I’m not sure I could have stomached the city (and the smells) at 100+ degree temperatures. We came away with great pictures, wonderful memories, and some fun souvenirs too (Moroccan spices and coffee included)!

I’d say it was a successful Thanksgiving.