Note: So I wrote this post last week when I got home from Norway, but haven't had time to sit down and add pictures or post it until just now. When I just reread what I wrote last week, I realized the same feelings still apply today, ten days later, and I could not be happier or more relieved to have a four-day weekend ahead of me to rest, relax, and reconnect with Z after nearly 3 weeks apart. Things for me are rough right now...but we take it one day at a time and we keep on keepin' on.

Oh you guys. Life is going through one of those “fast” stages. Time is moving too fast, things are happening too fast, I have too much standing in front of me, it’s too much, too soon, too fast, too hard, too overwhelming, too frustrating, too, too, too…

It’s not always roses and sunshine and smiling Facebook pictures. There’s a real life happening behind this blog, and we know life is messy sometimes.

But we press on. As the saying goes “we can do hard things”.

We can. We do. We just might be completely wrung out, feeling (and looking) like we've been hit by a semi-truck.

Anyways, there’s lot of layers to all of this that just aren’t meant for this blog today (or ever?), so let’s take it back to the shallow end of the pool, shall we?

This past weekend I spent in beautiful Norway with 55 of my closest German and Danish coworkers. I’m tired after just typing that thought, so if that gives you any indication of my present state of mind.

So yeah. I think it was fun. I’m still trying to figure out what I think about it. What I KNOW is that I am bone-tired, just so weary on every level…so the “thinking” process is not a reliable one right now.

Let me start off by saying that snow skiing may not be for everyone. I’m not ready to say it’s not for me, but I’m pretty close to saying that. I think I’ll stick to water skis thankyouverymuch.

So I had an hour and a half of ski school on the first day. In my mind, I’m picturing a GENTLY sloping hill that I can really ease into…Nope. Wrong. Fail. You lose.

THIS is “learning” slope. 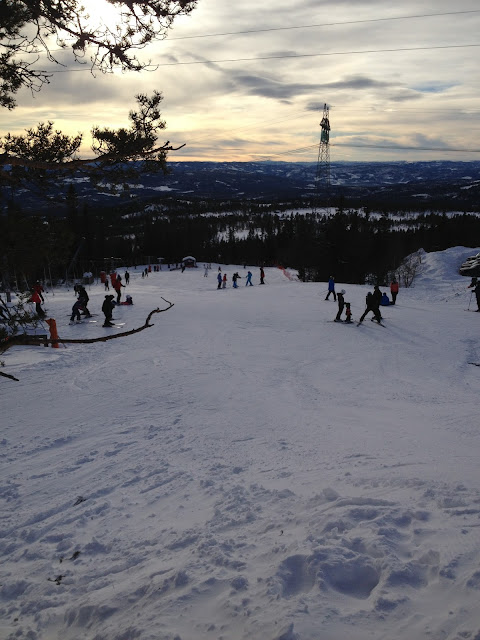 See that tiny little hut at the bottom and those tiny little people? There were two HUGE drop-offs between where I was standing and where that hut was. Frequent skiers, is this normal? Because I am SURE it's way too advanced for the bunny skiers. Actually, don't tell me. Let me just imagine that most normal ski resorts in the US have way nicer bunny hills that are so much more gentle and peaceful. I feel better if that is my reality. Don't take that from me.

AND I almost died, probably, because right after that hut is a CLIFF OF DOOM where you end up in the treetops if you don't stop in time. Whaaaaaat?! This was THE BUNNY SLOPE. WHAT KIND OF CRUEL TRICK IS THIS?!

So anyways, in my head I’m like “What is this, double black diamond extreme slope of death?!” Because it was.

But I have this friendly instructor that is way more confident than I am that I will learn (and enjoy) skiing.

It’s just this: I have control issues, maybe? Because I fought the skis ALL DAY. Then I fought myself to try to stop fighting the skis. Nothing about me on skis is natural or graceful or even slightly poised. One coworker commented (in the nicest way possible) that I looked like "some kind of alien insect" with my limbs and poles and whatever. So yeah, that's success in my book. Nothing like earning the respect and admiration of your coworkers than by giving them THIS image to remember you by (because this is probably definitely how I looked): 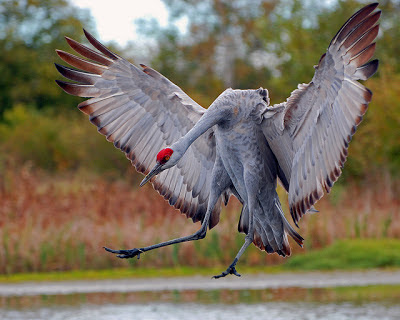 In addition to that immaculate form, there was ZERO relaxation of the body, it was full blown tension, every muscle in my entire body clenched tiiiiiiiiiiiiiiiight. So basically it was rough. But I managed to plow my way down and only fell a few times as I was making turns and careening out of control towards the cliff of doom and whatnot. So after my lesson I was released into the wild.

Naturally I took full advantage of my new-found skiing freedom and took a lunch break. I had a lesson the next morning and figured I had had enough for one day. I was already feeling muscles I did not know existed.

But then a friendly coworker told me about a VERY easy green slope up the mountain that was SO nice and pleasant and he would accompany me and it would be great. No problem, right?

FALSE. LIES. This day was full of deceit. And suffering.

We had to take a blue slope to get to the proper lift, but apparently we just missed a turn or something because 2 hours later I am dying on the side of a mountain, staring down at the steepest drop I have ever seen. Because this friendly blue trail merged into a red/black drop to the bottom.  No other option. 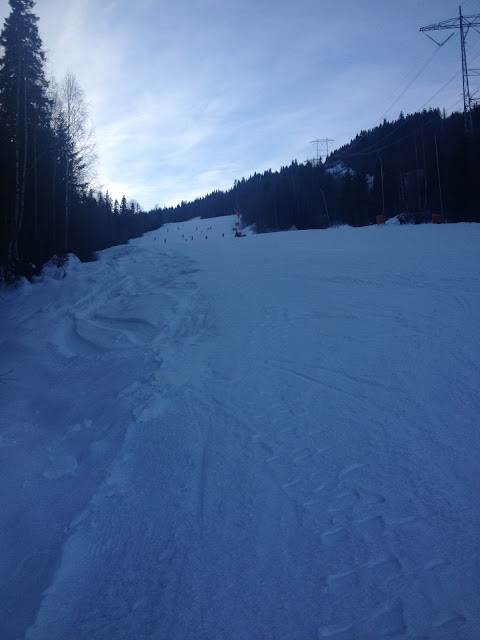 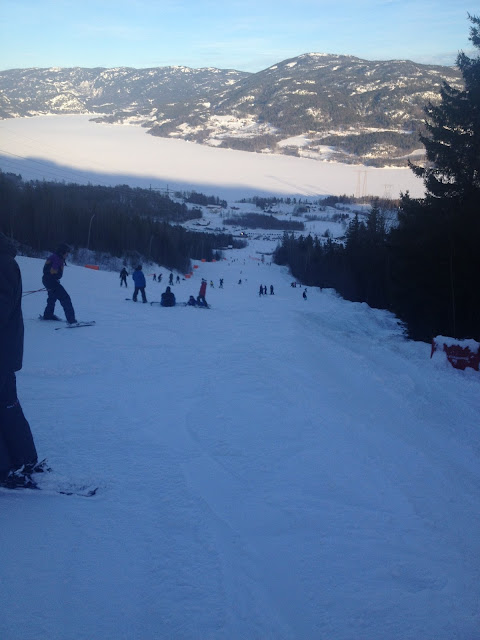 Guess who walked down the side of the mountain? THIS GIRL.

I mean, I think the story can end there. I woke up the next morning in so much pain. I can’t even talk about it. It hurts to think about it.

So I was disappointed, because I think I really would have had a much better experience if I had just done my lesson on Saturday, rested, and had my 2nd lesson on Sunday followed by the correct green slope. Alas. What’s done is done.

Let me just say this about the rest of the weekend (because this is a public blog and who knows who may stumble across it): It was an experience. It was VERY different than any company event I’ve every experienced (or even heard about) at any other company, especially in the US.
Fun? Yes.
Overwhelming? Yes.
A good experience? YES, absolutely.

And Norway was STUNNING. Freezing cold. But beautiful. I really would love to go back in the summer when the lakes aren’t all solid ice, because I think it would be delightful. 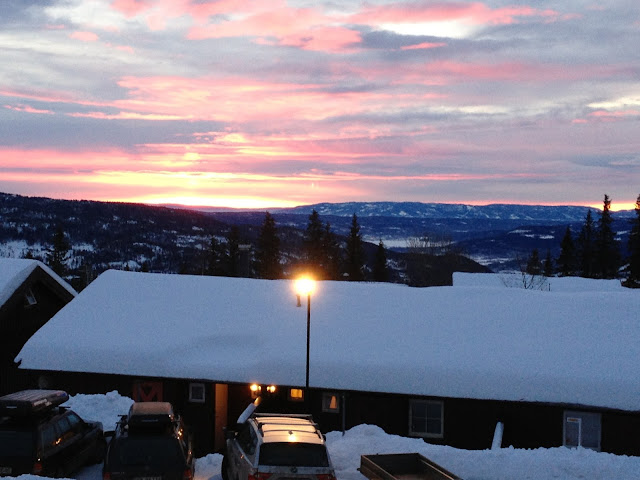 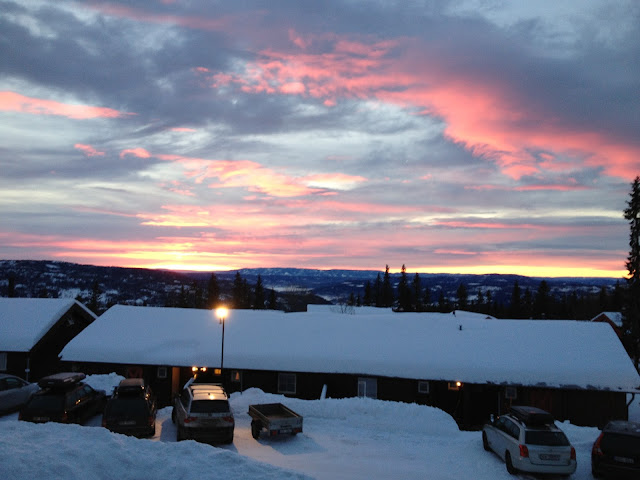 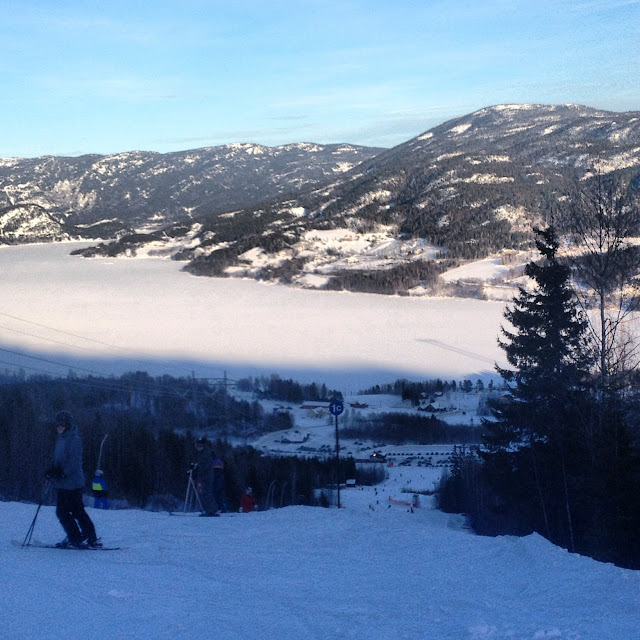 I know I’m fortunate to have these experiences. I’m thankful for them, even as I take some more Advil and drag myself through these next rough days of work and travel…

I'll leave you with this, because it kind of sums up my skiing experience, although that slope is NOTHING compared to what I had to tackle, those lucky ducks. Just watch the first 40 seconds; you'll get the gist. I love the song choice...

Email ThisBlogThis!Share to TwitterShare to FacebookShare to Pinterest
Labels: Travel